Normally, each week during the season, we look at the big events and big games around Division I men’s college hockey in Tuesday Morning Quarterback. This week’s TMQ, however, is the last of the 2019-20 season.

Jim: Paula, where do I start?

The last seven days, in my opinion, don’t have a word to describe them. We went from discussing who had a strong first week of playoffs to thinking about the possibly of having no fans at the Frozen Four to, almost immediately, understanding the reality that all playoffs were canceled, and the season was suddenly over.

It all happened so fast that it was nearly impossible to understand and wrap one’s head around. But alas, the season is finished.

It’s impossible not to feel bad for the players – especially seniors who will never play another college hockey game – and the coaches. Hard work is always rewarded by competing on the ice to determine a champion.

But not this year.

There were some great storylines that won’t play out. Would North Dakota win a national title after a two-year tournament absence? Would arguably the best Minnesota State team win their first NCAA game or more? Would Cornell pull off the double and win both the women’s and men’s tournament? All hypotheticals that won’t be answered.

Those were the questions that come to me off the top of my head. I assume you have a few as well?

Paula: I do have lots of what-might-have-been questions, Jimmy, but before I speculate on the hypotheticals, I need to talk about the reality of how the season ended for our sport and so many others.

It’s not only that ended it abruptly, without warning, and in a span that happened so fast that it’s still nearly too much to comprehend. There’s no doubt that the NCAA did the right thing, that all sports organizations – all large organizations that have it within their power to limit social interaction and human congregation – have done the right thing, as painful as the consequences are to people involved.

Setting aside the real economic consequences for individuals, businesses, and – yes – even the NCAA, the right thing led to an almost unimaginable scenario for the student-athletes we cover.

For many of these senior D-I players, this is the highest level of organized hockey that they’ll ever play, and these players must be grieving for that, compounded with the lack of finality.

For every single senior class except for one, their last seasons end with a loss. That’s tough, but that last, lost game provides them with a collective, shared experience, a definitive moment of closure. You and I have covered many such moments. We’ve been in locker rooms as that is transpiring. It’s awful – but it’s shared, it’s real, it’s finite. Players can mourn together, process together, share an experience.

This? This is amorphous.

While very real and a reality that all players share, it’s simply not the same as having played your guts out and losing before having to take off that sweater for the very last time. It’s heartbreaking.

Your hypothetical questions are great ones, and I do have a few:

Would Clarkson go as far as I suspected they would after I saw them early in the season?

Had Michigan peaked at the perfect time to carry the Wolverines to a Frozen Four in their own backyard?

How much damage would an Atlantic Hockey team do in this year’s NCAA tournament?

Looking at Hockey East, how many teams would make the tournament and how many would make it to the Frozen Four?

Could Duluth position itself to play for a three-peat?

How would the bubble play out as the conference finals progressed?

Oh, how I miss the conference championships. They’re my favorite thing about the college hockey season.

Jim: I will certainly miss the conference finals weekend.

Out here in Hockey East land, it was supposed to be a great opportunity to say good-bye and thank you to long time commissioner Joe Bertagna. So let me use this space to personally say thank you to commissioner Bertagna. I know when all of this craziness ends, we will be able to raise a glass of wine together.

One thing that, despite all this craziness, is still scheduled to take place will be voting for the Hobey Baker Award. The 10 finalists are to be announced this Thursday, so let’s take an opportunity to begin our speculation on what players will be on that list. I’ll give you five that I guarantee will be on the list: North Dakota’s Jordan Kawaguchi, Minnesota State’s Dryden McKay, Minnesota Duluth’s Scott Perunovich, Maine’s Jeremy Swayman and Harvard’s Jack Drury.

As someone who saw him play all season, I’d love to see UMass Lowell goaltender Tyler Wall on the list, but I think that’s a long shot with Swayman likely taking a higher billing in Hockey East, and generally that’s enough to keep a second goaltender from the same league off the list.

I also think that Boston College’s Alex Newhook and Massachusetts forward John Leonard both deserve a look. Hobey likes goal scoring, which might make winning difficult for the nation’s leading scorer, Jack Dugan of Providence, but he should be a finalist.

Who else am I missing, Paula?

Paula: I agree with all you’ve listed and will add McKay’s teammate, Marc Michaelis, who four for years has been more than just a key player for the Mavericks. Michaelis has been a big part of building a program that is ready to enter that fraternity of programs that maintains excellence year after year. He’s also improved in every year he’s played.

I’d make an argument for Arizona State’s Johnny Walker, a player with killer offensive instincts and wicked skills who’s helped the Sun Devils become competitive nationally without the benefit of playing in a conference.

Another defenseman I think may be included is Boston University’s David Farrance. He leads the nation in assists among defensemen and is among the top 10 players in the country for points per game, assists, and power-play goals.

Jimmy, USCHO poll voters received word today that there will be one more poll to be released next week. Does the way the season ended change how you approach this poll?

I’m really trying to think about the purpose of this one last poll and how best to vote. I like the idea of a final poll, something – anything – that helps put a final stamp on something that ended in a way that we couldn’t have anticipated.

Do you think that voters may speculate on how the season would have progressed had it continued?

Jim: I do like the thought of one final ballot for USCHO poll voters. Hopefully most will take it seriously and give some thought to the teams they believe would have advanced to the NCAA and Frozen Four and, when the chips were down, which teams would advance. I know my number one – North Dakota – won’t likely change, but I have some ideas of other teams that might move in my opinion.

And, as you say, it may get some closure.

The one thing that may not get closure, at least not yet, is whether seniors on this year’s team will have a chance at another bite at the apple. A few media different sources have noted that the NCAA is still deciding whether or not to give an additional year of eligibility to this year’s seniors.

Personally, I don’t think it will happen. And if it does, it doesn’t feel functionally viable as it could create difficult situations for incoming freshmen needing to delay, scholarship limitations, etc. Leave it to me to say the controversial topic for the end, but I’ll let you wrap this season with your opinion.

Paula: I don’t think that topic as it pertains to hockey is controversial unless the NCAA unwisely chooses to make it so.

Many teams had been eliminated already from their conference playoffs and were done for the year before the NCAA halted the season. Their seniors had already finished their collegiate careers. Granting eligibility only to those seniors whose seasons were to continue would create controversy.

As you said, there are real implications for incoming freshmen and for scholarships, but there are also issues about whether players would want to come back for another year. I think the NCAA will have a harder time with this as it pertains to basketball, and I’m eager to see how they consider the issue on the whole.

The season didn’t just end abruptly for the players. Coaches and staff with all teams are now left with the task of trying to put into perspective one of the longest seasons of any collegiate sport. I can’t imagine their disappointment and frustration. I know their concern for their players, but many coaches and staff are still coming to terms with it, I’m sure, and thinking about how to handle recruiting and other matters.

Everyone’s in limbo. And we don’t know how an extended outbreak will affect next season.

Closer to home, you and I and all of the USCHO staff – and our extended college hockey family – are coming to terms with our abruptly canceled family reunion, the Frozen Four. It’s an event unique in all of D-I sports, with a group of people that encompasses media, sports information, coaches, former players, fans – so many people that come together annually to celebrate the sport we love and to reconnect.

I’ll miss getting to send off Joe Bertagna in person. I’m sad that I won’t get to see Rick Comley honored this year as the Hobey Baker Legend of College Hockey recipient. I’m especially sad that I won’t get to lift a glass with my USCHO family and our tight group of friends. I was so looking forward, too, to the return of the Frozen Four to Detroit.

We’ll have to make up for as much of that as we can next year.

In the meantime, here’s hoping for the best for everyone as we anticipate a return to hockey next season. And from all of us at USCHO, a sincere thanks to all our readers and podcast listeners and everyone who reaches out to us. 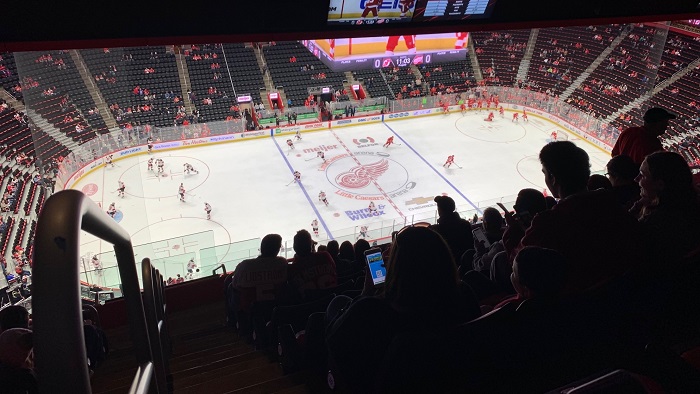 TMQ: Talking about weekend upsets affecting the PairWise, players under consideration for the Hobey Baker Award

USCHO Staff - July 16, 2020
©1996-2021 USCHO.com – U.S. College Hockey Online
Please support this website by adding us to your whitelist in your ad blocker. Ads are what helps us bring you premium content! Thank you!