It is a quick turnaround for many teams entering the playoffs and the final push towards a conference championship. Upsets abounded last weekend and already this week with Nazareth, Wentworth and Potsdam all taking out higher seeds in conference tournament play. Now is a time where the cream needs to rise to the top in order to win and advance. I finished last week with a mark of 7-3-0 (.700) which was a solid week. The overall season record now stands at 83-42-9 (.653) and I am working on some solid positive momentum entering the playoff schedule.

Here are this week’s picks for all of the quarterfinal and semifinal round playoff action in the East:

Stevenson @ Wilkes
The UCHC format definitely creates excitement with the two games and potential mini-game to decide the advancing team. Neither team finished the regular season on the positive roll they would like to enter the playoffs, but the Mustangs took a positive step on Wednesday winning their way to the next round. The Colonels have a lot of offensive firepower but look for Michael Paterson-Jones to be the difference in the crease for the home team through the mini-game finale – Wilkes, 5-2 – 1-2 & 1-0

Franklin Pierce @ Assumption
The Greyhounds went 2-1-0 against the Ravens in the regular season with both wins coming on home ice. The super-sophomores of Robert Holyoke, Dante Maribito and Michael Zampanti will be the offensive keys to getting the home team into the NE-10 championship game – Assumption, 4-3

Stonehill @ St. Michael’s
The teams went 1-1-1 in the three games including last weekend’s win and tie for the host team that had to rally for the win on Friday. The Purple Knights are 8-2-3 at home so look for a potential overtime win fueled by Thomas Flack or Sel Narby – St. Michael’s, 5-4

Nichols @ No. 14 Endicott
The Gulls wins over Nichols in the regular season were part of the Bison 0-9-0 start to the season. Endicott will not be seeing the same team this time around as Nichols has been rolling and knocked off Salve Regina in overtime to earn the semifinal game. Playoffs come down to goaltending and Conor O’Brien could be the difference for the home team.– Endicott, 2-1

Wentworth @ No. 7 University of New England
The Nor’easters took the regular season series 2-0-0 but now face a very hot goaltender in Connor Carbo whose 51 saves on Wednesday took out Curry in the first round. UNE won’t be surprised by the Leopards and will look to set the tone early by scoring first and moving on to hosting the title game– UNE, 4-1

Worcester State @ Massachusetts-Dartmouth
The Corsairs went 2-1-0 against the Lancers and outscored Worcester State 10-5 in the two wins. They earned the No. 3 seed with a win on Tuesday and won’t waste that effort by earning the all-important playoff win by a goal – UMD, 3-2

Salem State @ Westfield State
The Owls will need Daniel Backstrom, Francois-Xavier Girard and Jake Ratcliffe to bring the “A” game in order to win and advance against a Vikings team that has struggled this season putting wins together but will be ready to go on Saturday and looking to surprise the Owls – Salem State, 4-3

Southern Maine @ No. 1 Norwich
The Huskies upset Babson last week but now face a potent Cadet squad that hasn’t surrendered a goal in seven consecutive games. Tom Aubrun and company make it eight in a row and earn a shot to defend their NEHC championship – Norwich, 4-0

New England College @ No. 5 Hobart
The Pilgrims may have flown below the radar screen for many but coach Mark Taylor will make sure the Statesmen are ready for the potent offense from Carlos Fornaris and Nikita Pintusov. Third period decides this one for the home team – Hobart, 4-3

Plattsburgh @ Oswego
The Cardinals and Lakers are both on four-game win streaks following Plattsburgh’s double overtime win at Brockport on Wednesday. Compressor issues at Oswego’s Marano Campus Center Arena have moved the game from the current Saturday schedule to next Tuesday which means both teams will be well rested and ready for a great rivalry game– Oswego, 3-2

Potsdam @ No. 2 Geneseo
The Bears showed resilience in downing Buffalo State on Wednesday night and opened the season with Geneseo, playing to a 2-2 tie at home. They now move to the lion’s den where the Knights have lost only once at home with a driven group of seniors looking to play for another SUNYAC title. – Geneseo, 4-1

Wesleyan @ Middlebury
The two teams split the regular season series with each team winning on the road. The Panthers are coming off two big momentum building wins over Amherst and Hamilton on the final weekend to take the final home-ice seed. They don’t waste the effort in a game that goes to overtime – Middlebury, 3-2

Connecticut College @ No. 12 Williams
The Ephs won both games with the Camels in the regular season by identical 3-1 scores. The battle to earn the top spot will have kept Williams very sharp against the No. 8 seed but an empty-net goal Is needed for the final, and more comfortable margin – Williams, 3-1

Amherst @ No. 7 Trinity
The Bantams and Mammoths faced-off in the title game last spring but don’t expect any less intensity in the quarterfinal round this year. The teams split the regular season matchups with 2-1 wins going to the road team. Home-ice should make a difference and it does, barely for the Bantams – Trinity, 2-1

Bowdoin @ Hamilton
The Continentals and Polar Bears split the regular season games with each winning on home ice. Look for Nick Ursitti or Jordi Jefferson to score a big goal and move the home team on to the semifinal round – Hamilton, 3-1

Nazareth @ No. 3 Utica
The Pioneers have been the hunters the whole second-half of the season in chasing down the top spot in the UCHC standings. Not likely that they stumble here against an upset minded Nazareth club with Gianluca Baggetta in the crease – Utica, 3-2 & 4-1

It’s now or never for teams to play their best brand of hockey in pursuit of championship glory – “Drop the Puck!” 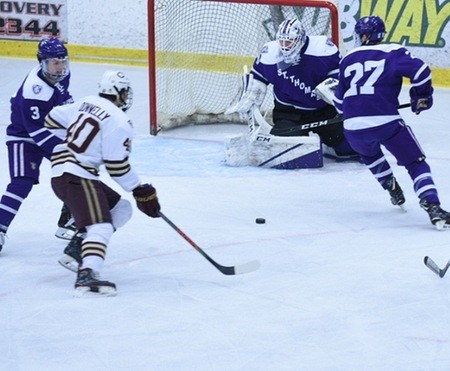